No Pain, No Gain…… FIRST BLOOD!

How My Buddy Used Rambo As A Resource 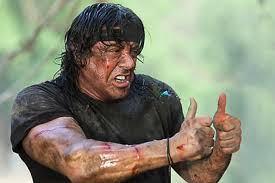 I love that you can be friends with someone for 20 years  and still find out things that you never knew about them. A  few days ago I was hanging out with my long-time buddy  Don, who had recently undergone a major surgery, and  this exact thing happened.

In my field of trauma recovery (to be clear, I’m taking  about trauma in the psyche and nervous system, I’m not a  doctor) I see lots of people who are having difficulty in the  present because of a surgical operation in the past. Even though we don’t generally think of surgeries as being traumatic – after all, we usually undergo them to fix a major health problem or even to save our lives – any operation is still an insult to the body. The body simply does not like being cut into, opened up and re-arranged, period.

However, we can greatly decrease, and even eliminate traumatic after effects of surgery by setting up the proper conditions as we go in, and come out of that anesthetic state.

Lots of open, compassionate communication with the doctors who will be performing the operation beforehand, and leading right up to the moment we go under is key – so we can set up the conditions where our body recognizes that person as an ally, and not a threat. Also, having family members and/or friends there as close as possible to the moment we go under, and also having them there when we awaken, is key to facilitating a good transition and recovery.

So, knowing all this, I inquired with my buddy about his experience. He seemed to be doing really well from what I could tell, not showing any signs of shock trauma or disassociation, and sure enough –  he had developed a very good rapport with the surgeon beforehand and was well supported by his family both before and after, but then he said something that led to this article being written, something I previously had no idea about!

He told me that he was also mentally and emotionally prepared for the surgery by all the other surgeries he had gone through in his life.

What!? I had no idea that this close friend of mine, whom I hadn’t met till college, had undergone many, many procedures, tests and surgeries through the course of his young life.

As he told me more and more about the illnesses and surgeries he had gone through as a young one, which all stemmed from being wounded by a procedure while still in the womb, my jaw dropped more and more…. and more.

Because I know about how surgeries and injuries can cause strain and dysregulation in the nervous system, and particularly how detrimental an injury suffered while still in utero can be, I just couldn’t believe how well and healthy my buddy was!

So I started asking him more about his early experiences and I explained to him the reason for my fascination – how could he be so healthy compared to other people who have been through similar experiences? What were his resources as a kid that enabled him to have such a positive outcome?

He took awhile to think about it and then said, “dude, it all comes down to this….. no pain, no gain….. FIRST BLOOD!” 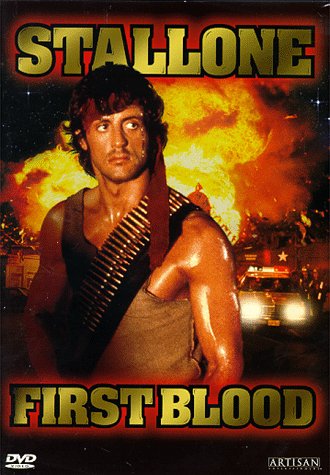 I imagine  that my confusion at that point was the same as yours is now, so let me explain.

By the time he was around 9 years old Don had already been through several serious illnesses and one surgical operation, all of which he recovered from well, and he told me that that was part of what had enabled him to face the next, upcoming surgery with optimism.

The doctors had found the scar tissue on one of his vital organs that was the result of the in-utero wound he had suffered and had realized that this scar tissue was at the root of all his difficulties.

So even though the upcoming surgery was going to be major, Don was able to face it with the knowledge that he had already successfully recovered from many previous trials.

But even more than all that, he told me, what really got him through was the movie First Blood, starring Sylvester Stallone. His family had a copy of the movie which he watched over and over and over again during the weeks leading up to his surgery.

There is a scene in that movie when Rambo has been wounded and has to stitch up his own flesh without the benefit of anesthetic. It was this scene in particular that totally fascinated Don, and he would rewind the tape and watch it over and over again.

He adopted the “No Pain, No Gain”, attitude of Rambo as his own personal slogan; and he said that he got so pumped up watching Sylvester stitch up his own wounded flesh that when it came time for his own surgery he would have liked to watch it happen!

He was eager to have his old scar tissue removed and confident that, just like his hero, he would emerge from the ordeal better than ever, and mentally and emotionally stronger than before.

So what was going on? How did watching a gruesome scene from an action movie prepare him so well for surgery?

Well, the images and experiences we take in from movies are interpreted by our physiology as equally real as anything else. Watching this flick, and that one scene in particular, pumped up Don’s sympathetic nervous system. He would watch and get that activation, and then, in his psyche, the ramping up of sympathetic energy became coupled with a successful surgical outcome. Essentially he was priming the pump, so to speak, for his own upcoming experience.

So when the time came to actually undergo surgery, and the inevitable sympathetic activation got going in his system, that association was there as a tremendous positive resource for him, along with the experience of all the other health related trials he had successfully endured. Instead of feeling terrified and trapped, as is so common with kids who have to undergo surgery, he felt excited and confident.

Hearing this story I was profoundly struck by our creative abilities and resilience as human beings.

One last important thing to mention is that his parents were there right up to the time of the surgery and right after. Also, he had secure attachment and close family bonds all his life. They had fights and struggles as all families do, but he also always witnessed these disagreements resolving – another powerful resource for his young system that let him know that even though there was strain and difficulty in life, there could also be resolution and peace.

Because of his solid foundation and instinctive, creative resourcing, he is the happy and healthy guy that I know and love today.